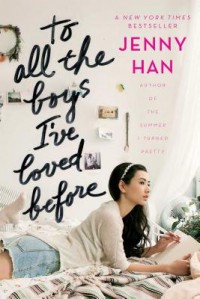 Hi guys, I hope you all are having a great day, and this is my review to Jenny Han’s To All the Boys I’ve Loved Before.

This book is about a day dreaming, die-hard romantic girl named Lara Jean Song. She is half Korean, and is the middle sister of the Three Song Sisters. Lara Jean has fallen in love with five boys throughout her life. But every time she is ready to forget about them and tries to get her feelings out, she writes them each a love letter. She then locks it up in her teal hatbox and does not touch the letter again. One day, Lara Jean’s letters get sent out to all the boys she’s written these letters to. And to save face, she decides to pretend to date one of the letter’s recipients: Peter Kavinsky.

I have to admit, when I first read the first three chapters of this book, I thought Lara Jean’s voice was very . . . childlike. I’m not sure if this is supposed to indicate her innocence, but for me, it was child-like. Some decisions and her train of thought reminded me of a little girl instead of a teenage girl who’s in her junior year. I found in the middle of the book this had less of an effect on me, but it was still odd to read about.

Another thing was that I expected more drama in this story than the plot indicated. I mean, I felt the entire story was more Lara Jean talking about how she wouldn’t fall for the “popular, handsome guy,” Peter Kavinsky. Another was her thinking about Josh. Another was of her thinking about Peter. I wasn’t sure where the story was really going by the middle of the book, so I tried not to think about that too much.

Okay, the entire time, I’m just wondering if Lara Jean’s going to try to find out who sent those letters, and she’s just too busy fake dating to honestly really care. Like, shouldn’t you be thinking, or investigating around? Am I the only one who thought this? Honestly, I knew who sent the letters when it happened. It was so obvious. I was actually happy when I found out I was right. But once again, Lara Jean did not care. She put at least 100% of her effort into fake dating. Like, it didn’t even come to her mind once that, “Who must’ve sent my letters like that?!”

Another problem I had was with the surrounding characters. They seemed to have no inner soul. They were . . . incomplete. Like, Genevieve was just bad for the sake of the story having an antagonist. Also, Josh and Peter didn’t make that much sense to me with their decisions considering their feelings for Lara Jean.

I felt like the sister relationship was done quite well though. That’s the one secondary aspect that worked best in my opinion.

This wasn’t a bad read, but it wasn’t exactly the best book I’ve ever read, either.

Honestly, at the end when Kitty told Lara Jean that she was the one who sent all the letters, I was really just pumping my fist for being right. But Kitty is nine years old, and she decides to send her sisters love letters to many boys. Of course, this is over Lara Jean’s lifetime, but still. If I was nine and I fought with my sister, I wouldn’t invade her privacy like that and send the letters. Especially since Kitty is such a brat in the beginning. And then Lara Jean just mentions that she’s just being “stubborn”.

And the way Peter and Lara Jean separated kind of felt like an unfilled hole. They confessed their feelings and then Lara Jean and he both separate. I felt it wasn’t played out like a conclusion. Especially the ending of the book: Dear Peter . . . what was that? Is this a duology or something? And Lara Jean herself mentions the letter is to Peter. Why did you break up with him if you’re not ready to say goodbye then?

Overall this book was an okay read for me. So I gave it three stars. This concept is different and people who are more interested in contemporary may enjoy this book better than others. I found that compared to Jenny Han’s Burn for Burn each character didn’t have their voice in this book. So I would recommend this to people who like contemporary romances. There is a second book coming out called P.S. I Still Love You but I probably won’t get it . . . maybe until I have nothing else to read.

That’s it for my review guys! Thanks so much for reading!