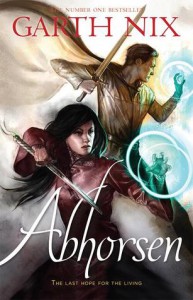 Hey guys, I hope you all are having a great day and this is my review to Abhorsen by Garth Nix!

The Ninth was strong and fought with might, But lone Orannis was put out of the light, Broken in two and buried under hill, Forever to lie there, wishing us ill. So says the song. But Orannis, the Destroyer, is no longer buried under hill. It has been freed from its subterranean prison and now seeks to escape the silver hemispheres, the final barrier to the unleashing of its terrible powers.

Only Lirael, newly come into her inheritance as the Abhorsen-in-Waiting, has any chance of stopping the Destroyer. She and her companions -- Sam, the Disreputable Dog, and Mogget -- have to take that chance. For the Destroyer is the enemy of all Life, and it must be stopped, though Lirael does not know how.

To make matters worse, Sam's best friend, Nick, is helping the Destroyer, as are the necromancer Hedge and the Greater Dead Chlorr, and there has been no word from the Abhorsen Sabriel or King Touchstone.

Everything depends upon Lirael. A heavy, perhaps even impossible burden for a young woman who just days ago was merely a Second Assistant Librarian. With only a vision from the Clayr to guide her, and the rather mixed help of her companions, Lirael must search in both Life and Death for some means to defeat the Destroyer.

OMG. I’M NOT GOING TO LIE. AFTER Lirael I HAD NO EXPECTATIONS FROM THIS BOOK!

I WAS SO WRONG!

Ahem . . . sorry. So, I finshed Lirael and I wasn’t too happy with it. Very disappointed to say the least. I felt like Lirael kind of put me off from starting Abhorsen and I wasn’t too big on that, I honestly just kind of wanted to forget about the situation. So obviously, when I started this book, my expectations were stupidly low.

I know. I can’t believe I doubted this series either.

Lirael did not complain at all in this book. And I felt that instead of growing more mature she grew more sensible as well. I noticed in the last book how she always “wept and cried her sobbing tears” *insert eye-rolling here* but in this book, she was incredibly strong. I felt so happy about this, and I grew to love Lirael as a character almost more than I did Sabriel.

Sameth also grew as well. I felt that he seemed to realize that the path of the Abhorsen was just not for him, but the other things that he did were so highly accomplished that it was so easy to overlook his slow character development from Lirael.

OBVIOUSLY MOGGET AND THE DISREPUTABLE DOG ARE MY FAVORITE! AHHHHHHHHHHHHHH! Thankfully, the bantering between Mogget and the Disreputable Dog didn’t feel forced in this book like it kind of did in the second book. I felt like that Mogget and the Disreputable Dog were purposefully fighting in the second book just for the sake of being a cat and a dog. However, in this book, it was extremely playful! Especially where Mogget would just refer to Dog as the Disgusting Dog! :D

The plot pacing was much much much much better than the last book. I felt pretty satisfied and learning about the foundation of this world that Garth Nix has built was so . . . wonderful! I felt really happy with the slow reveals and everything! Congratulations to Garth Nix for pulling this off!

Overall, Abhorsen is a great installment in this series and dare I say . . . equal to Sabriel for me? I felt so giddy while reading this, and it is so easy to see how Nix’s writing style for a fantasy book, is just so easy to understand and easy to flow along with.

I would recommend this series to anyone who likes Fantasy. I’ve honestly heard many authors that have written great books say that they were inspired by the Abhorsen series and how the world building was so good! READ THIS. The order of this series from favorite to least favorite would be Sabriel and Abhorsen at the same spot, I cannot choose between the two, and then Lirael. Although Lirael is my least favorite book in the series, go through with it, and you guys will honestly love this series for what it’s worth!

Thanks for reading my review guys, and I hope that you enjoyed it! :D