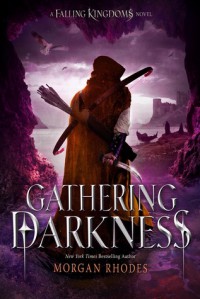 I think I finally got what it is about this series: I enjoy the plot and world far more than the characters, but this series is really character-driven.

Anyway, story time! I read Falling Kingdoms about a year ago, and although I found a lot of problems within it, I couldn’t see what it was about this series that made me want to try the next book. Then, I read Rebel Spring, and that book made me very angry. But, for some reason, I’ve been hearing so many things about this series lately! So, one last time, I decided it was time to read Gathering Darkness with a new approach.

So, first off, I want to say thank you to The Primroses Were Over who suggested that I look at this series like a TV show! I think that once I got it in my head that, “Yeah, well, that’s drama. Yep, it’s drama! Oh, look, more drama,” it was much easier to get through this book and to overlook things that would’ve been difficult the first time.

Of course, some things still remain unchanged. I hate Lucia and Jonas with a passion. And it’s not even because they’re unlikeable characters in the story! It’s just that I find their character arcs to be so unrealistic and ridiculous. From book one, we’re constantly told that Jonas is a genius, yet I see nothing from it. And we’re also told that Lucia’s some special snowflake whereas she’s so dumb and immature and so so selfish. It makes me angry.

Let’s not forget the fact that these characters make me want to yank out my own hair and cry a river full of tears.

But, I think the second half of this book was its strongest! :D

This book takes a closer look at the Kindred and finding the crystals, and I feel like the first half of this series (books #1-3) was more of a buildup towards the next book because we know the characters and we finally see where the plot of this story overall is heading! So, great ending there, and I was really into the book by the time I reached the end! :D

The only problems I had were when Magnus cheated on Cleo, because I believe in commitment! At least have some shame or something! Also, the scene where we find out that Sabina, the mistress of King Gaius, was Magnus’s true mother and tried to seduce him. Like, umm, does incest feelings run in the family or something?!

Overall, Gathering Darkness is a good book in the series that had a really strong second half. I feel like this series is going to get more into the action now, and I enjoyed this one more! :D I think this has slightly pushed me more to read A Book of Spirits and Thieves which I believe is either a prequel or spin-off series to the Falling Kingdoms series.

Thanks for reading my review everyone and hope you have a great day! :D