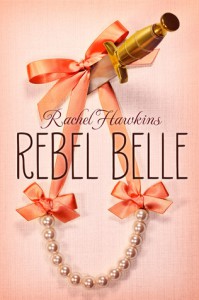 “Paladin: an honorable knight; defender of a noble cause.”

“Laaaaaame,” I whispered. I much preferred superhero.

This book was definitely a lot of fun.

Rebel Belle is filled with the southern way of things at Harper Price’s small town called Pine Grove. Except that she becomes a Paladin at Homecoming Night after seeing her janitor die and killing her history teacher. Just the normal ;)

Although Harper is usually the kind of character I don’t like, aspects of her felt very real. I agreed with some of the difficulties Harper had in terms of actually accepting what it meant to be a Paladin, and I don’t blame her for being very hesitant or scared to accept the new responsibilities that she had.

The only thing that I had a problem with in this story was that at times it was annoying to read about Harper’s boyfriend problems. I really didn’t care that Ryan was this or that. I was hoping for more action instead of a huge buildup towards Cotillion.

Overall, a fast paced and fun read with a southern aspect. Definitely continuing on with the trilogy.